A Champion for Women

Joan Reardon '52 has just celebrated her birthday, she shares with visitors to her home on the 20th floor of an historic Chicago building overlooking Lake Shore Drive. It's a chilly and damp February day, and the fog hanging over the lake is visible from the north- and east-facing windows.

Despite the dreariness outside, the space, especially Reardon's book-lined office, is welcoming.

As Reardon takes a seat at her desk, the conversation turns to oysters, her favorite food, which she recently enjoyed with a friend. That she did so should come as a surprise to no one. Her affinity for the seafood delicacy can be attributed first in part to gastronomical love and second to the career path on which they led her as a cookbook author, culinary historian and biographer.

Oysters may also be why Alverno now houses Reardon's archives, including taped interviews with Julia Child; journal entries from one of America's best-known food writers, M.F.K. Fisher; and notes from Reardon's travels to Bordeaux, France, with famed restaurateur Alice Waters. 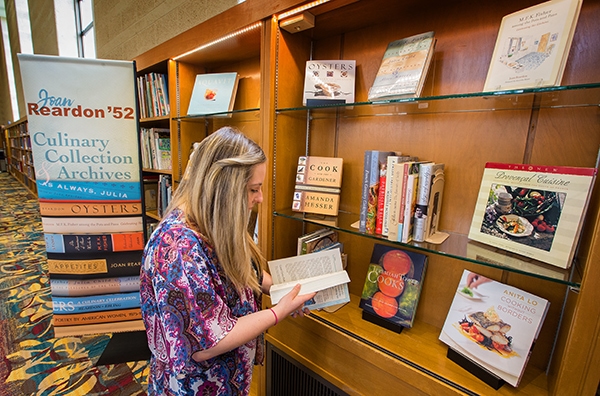 The Alverno library is home to the Joan Reardon culinary collection, which honors the alum author who has championed women throughout her career.

Culinary craft in Cotuit and California

Reardon's journey to becoming an author began in the 1970s while she was professor and chair of the English department at what was then Barat College in Lake Forest, Ill. She increasingly found herself using her sabbatical time to write at the vacation home she owned with her husband in Cotuit, Mass., a small but cosmopolitan village on Cape Cod known for its oyster beds.

As the summer visitors who flocked there from New York and Washington, D.C., retired, the dynamic changed.

“All of a sudden, the women had their husbands going to the supermarket with them,” Reardon says. “They were feeling squeezed and going a little crazy. We needed a project.”

They quickly found one. With the food scene of Cotuit centered around oysters, Reardon and her friends shucked them and served them at lunches they hosted. It not only became the foundation of Reardon's social life but also resulted in a cookbook, published in 1984. To her surprise, Oysters: A Culinary Celebration was met with a rave review from Craig Claiborne in The New York Times.

And so began Reardon's transition from teaching to cooking. She enrolled in culinary school — “I couldn't have the name without the game,” she says — where she earned a pastry certificate, setting her on the path to her newfound career.

For inspiration, she regularly visited the Schlesinger Library on the History of Women in America, located on Harvard University's campus. She eventually joined the Culinary Guild of New England, where she met Child. The famous chef and author began inviting Reardon to her home, and the two became fast friends.

Reardon asked Child if anybody was writing about her life and career. To Reardon's surprise, Child said no.

“She was very much a supporter of women in the profession, and she made it fun to be in the kitchen,” Reardon says.

Soon, Reardon got the opportunity to connect with other culinary idols such as Fisher, who sent her a letter praising her oyster cookbook. It was on a trip to visit Fisher that Reardon dined at Waters' Chez Panisse, which has championed local, organic and seasonal food since it opened in Berkeley in 1971.

It was only natural, then, for Reardon to celebrate these authors in what became the book M.F.K. Fisher, Julia Child and Alice Waters: Celebrating the Pleasures of the Table, published in 1994.

“When you have such an interest in food, it's very easy to talk to people about what they do. It was a natural extension of what I was doing,” Reardon says. “And I chose to write about women because people write about men all the time. The time to celebrate the contributions of women to America's culinary landscape was now.”

The books that Reardon authored, along with her correspondence and cookbook collection, are now housed at Alverno, her alma mater.

It's a fitting home for many reasons, especially considering Reardon's successful career as an author who champions the work of other women — a natural extension of Alverno's mission.

"Alverno has done in the past, and continues to do, wonderful things for women,” she says. “This is exactly the right thing to do and why I'm so pleased that my collection will live on at the College and be accessible for the young women who are educated here.”