Carol Dolphin '62 first visited Alverno as an eighth-grader at St. Rita's in West Allis. Little did she know then that the College would become a lasting part of her life.

When it came time for Dolphin to attend college, she was offered an Alverno scholarship — and hundreds of people have since benefited either directly or indirectly from her Alverno experience. It's Alverno's ripple effect at work once again.

"That scholarship was the deciding factor for me. In retrospect, it was very fortunate and serendipitous,” says Dolphin, a retired educator who spends her time traveling, volunteering as an art docent, and acting and directing in local theatre. 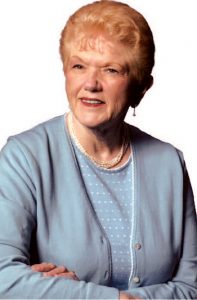 Her Alverno education prepared her to take on big responsibilities as a new teacher at the then one-year-old New Berlin High School when it was looking to start a drama program.

“I had directed some plays and had a good student-teaching experience. I said: ‘Sure, I could do this,'” Dolphin says.

Not only did she impact the students at New Berlin High School, but she went on to become the first female full professor in the communication arts/theatre department at the University of Wisconsin-Waukesha and retired as chair of the 13-campus department.

She's also made a difference in the lives of countless Alverno students, serving as the first lay alumnae director at Alverno, volunteering as an assessor for 40 years and supporting the college financially for more than 30 years.

One of her most lasting contributions came in 2004 when she established an endowed scholarship to assist students majoring in education with an emphasis on arts and communication. Ten women have received the scholarship; nine became teachers and the latest is still pursuing her degree.

“I was paying for college myself, at one point working 40 hours a week at two different jobs and taking 20 credits. I was stretched so thin,” Chartier says. “Without her scholarship, I can't imagine what I would have done. I would probably still be in school.”

Danielle Ratkowski '11, an English teacher at Indian Trail High School and Academy in Kenosha, was also paying her own way and says every bit of scholarship and grant money made a difference. Even more important, however, is the relationship that has flourished between the two women.

"I was able to make a real connection with Carol,” Ratkowski says.

She is still grateful for receiving the scholarship, and she pays it forward every day in her own classroom.

“Giving back to my students means giving them opportunities to explore what kind of learners they are,” says Ratkowski, whose school enrolls 2,400 students from diverse backgrounds. “Some of my students are in poverty and they struggle at home. When they come to school, I want them to have the same opportunities as someone who comes from a well-to-do family.”

The relationships she has with her scholarship recipients mean the world to Dolphin. She stays in touch with most of them through Facebook. She always looks forward to meeting new students, deriving joy from the knowledge that she is helping them to earn a degree that will benefit others and giving back to the place that gave her so much.

“I still consider the choice of going to Alverno one of the most life-changing decisions I ever made. I had so many opportunities,” Dolphin says. “I hope my scholarship provides the same kind of opportunities for success that I had.”

Do you have a story to share about the ripple effect of your Alverno education? If so, let us know at magazine@alverno.edu.