When Christine Wodke '04 started running competitively 40 years ago, she had no idea she was afflicted with a neurological disease that degenerates motor nerves and progressively weakens muscles.

Frequent injuries and unrelentingly tight calves that baffled physical therapists turned out to be symptoms of Charcot-Marie-Tooth, a genetic condition that affects three million people worldwide. While CMT is about as common as multiple sclerosis, “Most people have not heard of it,” Wodke says. “A lot of cases go undiagnosed.”

Since her own diagnosis in 2009, Wodke, an engineer with a master's degree in organizational development and adult learning from Alverno, has become a passionate advocate for CMT awareness. She uses her ability to run as her primary platform. 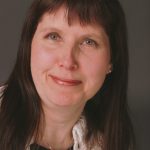 “When I got diagnosed, I was like, it's crazy that nobody has heard of this disease,” says Wodke, who had stopped racing years before but still ran for fitness. “If I have this gift of being able to run, I'm going to use it.” She decided she would run the Boston Marathon. “I said, ‘I'm going to do it, because this will be a great way to raise awareness.'”

She founded Team CMT with a college friend who joined for support. During a race that was part of her training for Boston, Wodke noticed the runners in team shirts, representing causes or organizations. “We can be guys in shirts, too,” she remembers thinking. “Let's brand ourselves.”

Team CMT “grew much bigger than I thought it was going to,” Wodke says, to more than 230 athletes from 41 states and 10 countries.

“What's amazing to me is that we also have dozens of athletes with CMT,” she says. “You think you're the only one, but I found all kinds of people in the same boat: They don't know any other athletes with CMT, and they want to talk about things like how to train.” Team CMT enables people to connect around this and other topics, post photos online and draw inspiration from their teammates.

Wodke chronicled her experiences in her 2013 book, Running for My Life, Winning for CMT. She also wrote Soup Sundays, a book of healthy recipes. “Everybody eats,” she says. “If I post a recipe online or someone buys the book, they may link to my blog site and read about me as an athlete with CMT, so I can reach a broader audience.”

Today, Wodke is still running, doing triathlons and determining if her ever-tight calves will let her do her fourth Boston Marathon in 2021. Her latest passion is competitive Nordic sports — she recently learned to skate-ski, which is easier on her body — so she's nowhere close to sitting on the sidelines.

“My faith is a huge part of what propels me,” Wodke says of her attitude toward living with CMT. “I look at this journey as, ‘God gave you a gift that a lot of people with CMT don't have. You've been given a lot. You need to give back.'”