The basement of a pharmaceutical company might sound like an odd place to discover one's creative soulmate, but Natalie Sorrentino '04 and Courtney Kotloski aren't afraid to embrace the unexpected.

Sorrentino, an artist and art therapist, had been dabbling in stationery and other illustration projects after her day job running creative workshops for corporate clients, “but nothing was really igniting,” she says. Her whimsical watercolor illustrations needed a voice. 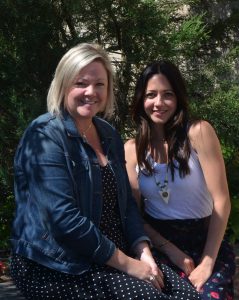 One day, Sorrentino started chatting with her husband's coworker, Kotloski, in their basement office. “Let me see your work,” urged Kotloski, who was blown away. “What are you doing here?” she asked in wonder. “This is beautiful, beautiful stuff.”

Kotloski, who worked as an actress and playwright before becoming a corporate writer, was craving a creative outlet herself. She offered to write three stories inspired by Sorrentino's artwork in a trial of a possible creative partnership. When Sorrentino read the first drafts, “I started bawling. It was just the voice that it needed,” she recounts.

Five years later, the pair known as Gnat and Corky, a playful nod to their names, have published four books. The fourth, From Malena With Love, hit bookshelves in September. The duo creates “universal stories based on the spirit of real kids,” to quote their book blurbs. But they resist the children's book label. “We don't write for children; we write for people,” Kotloski notes.

A few months after the women first met, they launched a blog to build their audience. Kotloski crafted quips, poems and other verse to go with Sorrentino's art.

Kotloski had the idea of posting an online questionnaire where kids could answer questions ranging from “Why was the world created?” to “If you went to the moon, what would you do up there?” to “What does the tooth fairy do with all the teeth she/he collects?” She then spins stories from the kids' responses. “I love kids,” she says. “They say the greatest things without a filter.”

Their first book was Addison the Light Catcher, inspired by the devoted sister of a little boy with Down syndrome. Then came Ken the Keeper, spurred by the story of a boy who started a no-kill shelter called the Happy Animals Club. The stories aren't straight nonfiction, though the real-life kids are featured in a short bio at the back of the books. “It's more about the spirit of the kids that can speak to the masses,” Kotloski explains.

The questionnaire led them to 13-year-old Will, the namesake of their third book, Will It. Will has a rare condition, Bardet-Biedl syndrome, that usually leads to blindness by the teenage years. Kotloski conducted a follow-up interview with Will, and at the end of a wide-ranging conversation about the boy's aspirations, she asked if he had anything else to share. “I'm going blind,” he said. “I love my family because they help me see in the dark.” Will's words and indomitable spirit became a story about facing challenges with bravery and humor. The book is available in English, Spanish and Braille.

They've since received hundreds of submissions (including several from Sorrentino's persistent daughter Malena, who enjoys answering the questions again and again). In fact, it was Malena, at age 9, who inspired From Malena With Love when she shared her vision of what a world without love would look like — completely gray. Sorrentino painted most of the book's artwork in stark black and white.

As Gnat and Corky's following has grown, they've responded to requests from the Cystic Fibrosis Foundation, Down syndrome advocates, and the diabetes community to tell stories of children with those conditions.

But their stories aren't about differences. “We like to highlight that we're more alike than different,” Sorrentino says. “It really became this world of inclusion, kindness, and sharing other people's stories. It's about celebrating all abilities, color and light and love, and the power of kids and people in communities.”

The power of art

Sorrentino has wielded a paintbrush ever since she got her first watercolor kit at age 3. She majored in art and psychology at the University of Wisconsin-Oshkosh and had just a semester left when she decided to transfer to Alverno to pursue art therapy. Her stepmother is a proud Alverno alumna who thought it would be a good fit for Sorrentino. She was right.

“Being surrounded by women and the spirituality and the confidence — I felt born again,” Sorrentino says. “It challenged me every day, but everything I do now is because of Alverno. They put me in the community, taught me how to speak in front of people. The first semester I was here, I was practicing art therapy.” She worked in art therapy at Rogers Memorial Hospital and elsewhere in Wisconsin and Illinois for more than a decade before moving into marketing and team-building work, and now, children's books.

“This is its own art therapy,” she says of the book series. “One of our biggest dreams is to reach people in a different way — in a larger, more subtle way. With the way Courtney writes and my intent of honoring the spirit of the children with the illustrations, we're subtly reaching people on a spiritual level and tackling big topics without being heavy-handed. I think that's the real power of art, which is what made me choose art therapy in the first place. It's a tool to get us to communicate.”

The books have resonated deeply with readers. A mother of a child with Down syndrome approached them at a book event and said, “Thank you for making a book that includes my son in a way that isn't offensive, that isn't the same old, same old, and that my daughters can be proud to read to him, too.” Another time, an 8-year-old stood up during a school visit and tearfully declared the message she took away from a story: “Everybody has a light, and everyone has something special and a story to tell.”

And it's that mission that keeps Gnat and Corky going.