Best of Both Worlds

During high school, Maddie Tripp decided she was destined to become a teacher. Among the education programs she researched, one stood out for its early field experiences and abilities-based curriculum. “Alverno,” she says, “was so unique.”

Now a sophomore, Tripp is in the first cohort of an integrated undergraduate program that further distinguishes what Alverno can offer aspiring teachers. Upon completion, she'll be eligible for not only her Wisconsin teaching license but also an international license as a Montessori educator.

Tripp had never heard of Montessori — an educational approach founded in the early 1900s that emphasizes multi-age, self-directed, hands-on learning — until her introductory course with Kathy Lake, professor of education. She was intrigued enough to visit Lake during office hours, hoping to learn more.

“We talked about how great Montessori programs are, how well they look after the child, and how big of a difference it can make to their learning and growth,” Tripp says. After representatives from the Montessori Institute of Milwaukee (MIM) visited Lake's classroom to share the Montessori theory and outcomes, Tripp says, “I fell in love.” 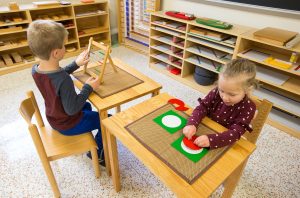 When she learned Alverno and MIM were developing an integrated bachelor's degree program, Tripp told Lake she was all in. “I was so for it,” she says. “I was like, ‘Kathy, we have to make this program happen!'”

By Tripp's second semester, the program — the only such integrated bachelor's program in the country — was up and running, with MIM's executive director, Andrea Fleener, teaching a Montessori theory class to the inaugural cohort of six students. Fleener says the new program “prepares teachers to navigate the public-school system as practitioners of the Montessori method, which, to me, is the best of both worlds.”

This fall, Fleener's commute from institute to classroom shrank significantly: MIM relocated from Milwaukee's Bay View neighborhood to the Alverno campus, paving the way for new programs to fortify the pipeline of Montessori-trained educators in southeastern Wisconsin. And a program for paraprofessionals in Milwaukee Public Schools' Montessori schools to obtain dual licensure is already under way with at least 13 participants.

The new programs are not only perfectly timed, but their Milwaukee location also provides an immediate market. Montessori education is in high demand in the city and region, and although the city's public Montessori schools are the largest such group in the contiguous United States, demand far outpaces supply. For MPS, which enrolls about 3,500 students in eight Montessori schools, Montessori represents a way to potentially help reverse declining enrollment — if only there were more licensed teachers.

“Milwaukee has a huge need for trained Montessori public school teachers, but we don't have a pipeline, and that is what we are creating with Alverno,” Fleener says. The integrated bachelor's degree, she adds, is ideal for would-be educators who already know they want to teach using the Montessori method, as Montessori has historically been a post-baccalaureate certification: “We're taking that hurdle away.”

This year, MPS approved a Montessori strategic plan. Research found that that MPS's Montessori students outperform peers academically. What's more, 30% of families on the long Montessori waiting lists opt out of MPS if they can't enroll their children by age 3.

“Montessori is something that parents want,” Lake says, “because it's a strong, successful education.”

Enrollment is also on Lake's mind as Alverno builds awareness about the new programs. “This program strengthens our presence in the community, and it's very consistent with our mission to meet the community's needs and prepare well-qualified teachers who can teach in a variety of diverse settings.”

In Alverno, MIM has found a partner aligned with its very approach to education. “Alverno is interactive in the classroom, hands-on learning and performance assessment, and all of that is consistent with Montessori,” notes Lake. “One of the goals of Montessori is that students become independent learners, very much able to take charge of their own education, and that's congruent with Alverno's underlying principles.”

Looking ahead, Fleener says program recruitment efforts may target school districts with Montessori programs, seeking out Montessori-educated students who want to become teachers. “As we build the program, we're looking at how it can be something that makes Milwaukee a destination and makes Alverno a top choice for future teachers,” she says.

Fleener is excited about what the future holds for Tripp and her classmates, whether they choose to stay local or take advantage of the global aspects of the Montessori certification. Tripp is already considering the options and says she would love to incorporate international field experience into her education.

“Ideally, through Alverno, I would want to pair up with a Montessori institution abroad so I can gain that global perspective and see how Montessori impacts other cultures,” she says. And once she's dually licensed? “Teaching internationally with Montessori would be amazing if it works out,” Tripp says. “But if not, I want to stay in Milwaukee and be a part of this up-and- coming Montessori movement.”